“We are thrilled to be a part of the 2009 Help the Homeless Walkathon,” said DASH Executive Director Peg Hacskaylo. “Participation will help DASH to raise awareness and foster support for ending homelessness that results from domestic violence.”

Founded in 2006, DASH provides safe housing, housing resources and information, as well as training and technical assistance to community agencies and victim service programs to increase the availability of safe, affordable housing options for women and their families. DASH serves dozens of local organizations and assists more than 1,000 local residents annually. For more information, visit www.dashdc.org.

DASH Executive Director Peg Hacskaylo noted, “We appreciated the opportunity to showcase our innovative programs and services, and more importantly, to dialogue with Ms. Pierce about the profound and growing need for domestic

violence programs in our city.” 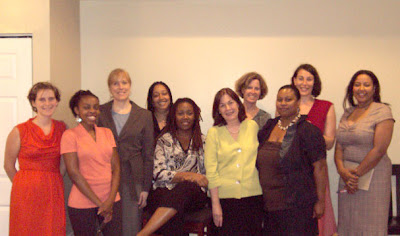 (Washington, DC) – The DC Department of Housing and Community Development (DHCD) today announced word from the Treasury Department that the District of Columbia will receive $33.7 million in American Recovery and Reinvestment Act (ARRA) funding to spur the continued development of affordable housing units.

Mayor Adrian M. Fenty said, “This new stimulus funding will have an immediate and critical impact on the development and rehabilitation of affordable housin in the District of Columbia. It will help us move forward with affordable housing projects, and it will generate much needed jobs for District residents.”

Under Section 1602 of the American Recovery and Reinvestment Tax Act of 2009, housing credit agencies, such as the District’s Department of Housing and Community Development (DHCD), are eligible to receive grants in lieu of low‐income housing credits under section 42 of the Internal Revenue Code (the Code) for 2009. In doing so, the District is electing to take a portion of its 2009 housing credit ceiling in the form of grant amounts, and agreeing to the terms and conditions applicable to the Section 1602 program.

In an effort to create and preserve opportunities for affordable housing and economic development in the District, DHCD said it will direct the Section 1602 grant funds to finance construction or acquisition and rehabilitation of qualified low‐income building for low‐income housing in lieu of low‐income housing tax credits.

Washington, DC—The District Alliance for Safe Housing (DASH) today joined Mayor Adrian M. Fenty at the Lighthouse Center for Healing at a ceremony that marked notable achievements in the city’s commitment to house the homeless. The occasion spotlights remarkable growth in domestic violence safe housing in the District.


“The Mayor’s commitment to funding domestic violence housing sends two very important messages,” said DASH Executive Director Peg Hacskaylo. “It means that women and children in our city will not have to choose between living without a home and living without abuse, and anyone made homeless by domestic violence is entitled to safe housing developed specifically to meet their needs.”


“Because domestic violence is a primary cause of homelessness among women and children, the urgency to provide safe housing options cannot be understated,” said Hacskaylo. “DASH is proud to be a leader in the expansion of safe housing in our city.”

DASH NEWS RELEASE : April 30, 2009
DASH Honored by the Department of Justice
Washington, DC—DASH was recognized by the U.S. Department of Justice during 2009 National Crime Victims Rights Week. The organization was presented with a “Justice for Victims of Crime Award” for its work to shelter and support domestic violence survivors. “DASH is honored to receive the ‘Justice for Victims of Crime Award’ in recognition of our work,” said DASH Executive Director Peg Hacskaylo.
The Award, presented annually at the Crime Victims Rights Week Ceremony, lauds outstanding dedication to the cause of justice on behalf of victims of crime and their families.
– END –